In The Fields They Hollered in Pain 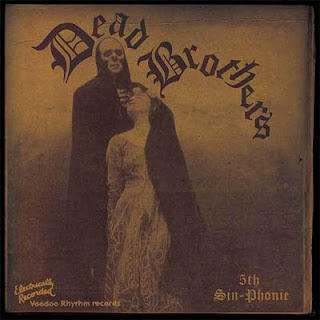 Most people know I'm a huge fan of anything and everything on Voodoo Rhythm Records.  I've only said it about 5,368 times.  The Dead Brothers, a funeral band like no other, have always been a favorite.  5th Sin-Phonie is no exception. Thirteen (yes, I know) songs of pure "delinquent jazz" and and horn-heavy musings on death, love and life.  Standards in many a band's set list, but no band does it like this.  No band ever will, either.  The Dead Brothers is one of a kind, and this release holds quite a few surprises for die-hard fans.  Surprises and secrets.  All are delightful, of course.  All are worthy of your time.  Enough hyperbole, though.  Let's dig into the meat.
First things first, there are plenty of original songs on here, but there are also two covers: the obvious "Bela Lugosi's Dead" and the less-so "Teenage Kicks."  Both are done in the Dead Brothers' own unique way.  Fans of Bauhaus' original song should like this one quite a bit, too.

The next thing, which I find fascinating, is who is helping out with the song writing.  None other than M.A. Littler, filmmaker, pirate and general thorn in the side of mainstream thinking.  Littler has always been linked with Voodoo and the acts on it, but seeing his name pop on here was quite the pleasant surprise.  He is as every bit as good as I would expect, but then again, I'm a big fan and have been for years.
Focusing on a single Dead Brothers song is a lot like not being able to see the forest for the trees. Each release is a complete circle in and of itself. And while each and every song can stand on its own, when taken as a whole (something rare in this age of iPod shuffle dead dance) they create a decadent, perverse Disneyland of despair and delight. You will not possible understand that, however, until you actually sit down and listen to an entire release. This is a good place to start ...


Mandatory FTC Disclaimer: I got this sent to me to review. That in no way influences what I think of it. Clicking on a link may earn me some cashola.
Posted by -Doug Brunell (America's Favorite Son) at 2:23 PM

-Doug Brunell (America's Favorite Son)
My life is an open book. It's all lies, though.